Goat and rooster team up to save hen from hawk attack 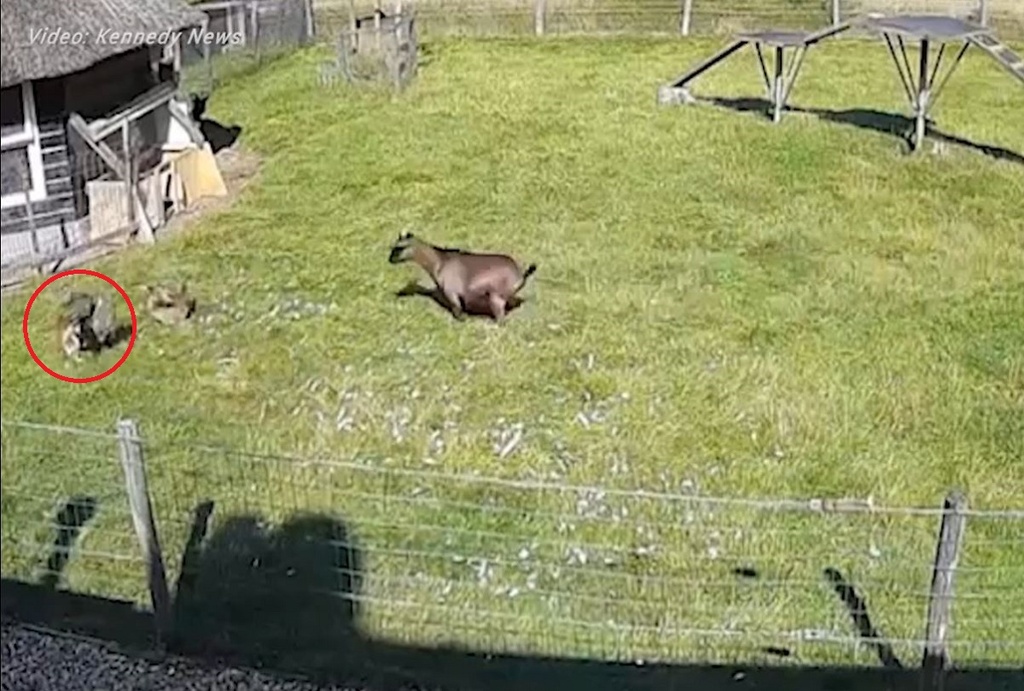 The incident that happened on a farm in Holland looks like an animated movie script. Luckily the chicken came out without serious injuries.
Rooster and goat team up to save chicken from hawk attack
As the hawk attacked the hen, a rooster and the goat Bruin soon came to the rescue (Photo: News.com.au/Kennedy News/Reproduction)

It seems, but it is no longer a “children’s” fable: a goat and a rooster teamed up to save their friend hen who was being attacked by a hawk. The impressive scenes were captured by the security camera and went viral on the internet.

Farmer Jaap Beets, 59, who lives in Gelderland, the Netherlands, was at his home on September 5 when he heard a noise generated by farm animals.

“I was very proud of the rooster and the goat that jumped to defend our hen. I was also very relieved that the chicken survived.”

The recording that has been successful among netizens shows the moment when a hawk dives and grabs the chicken, reaching the point of flying feathers during the attack. Almost immediately, one of the roosters on the farm runs to rescue its friend, defending its companion with spurs.

Upon realizing the scene of violence, the goat named Bruin, according to the website, also joined the rescue of the chicken, attacking the hawk with headbutts, trying to scare it.

As the News shows, goats have a reputation for being calm and cute animals, for jumping around, but they take the surveillance of the land where they live “seriously”.

Luckily for the hen, the rooster and the goat managed to save her, forcing the hawk to fly away just 17 seconds after the fruitless attack.

Cited by the Australian website, Jaap Beets says that the hen suffered only minor injuries and that the other animals on the farm “gathered around her” to help heal.

Interestingly, according to the Dutch farmer, this was not the first time that his farm had gone through a “dramatic” situation. Twice, goats and turkeys had to help rescue the chickens.

“In the seven years I’ve lived here, it’s the third attack on our chickens. That was the second hawk and again there was a buzzard too,” says Beets, quoted by the News.
Bird of prey couldn’t secure a meal thanks to farm animals in the Netherlands’ Gelderland province

A fearless rooster and goat faced off against a hungry hawk to save the feathers of a friendly hen. The surprising attack and defense was recorded on a farm in the province of Gelderland in the Netherlands.

The property belongs to Jaap Beets, 59, who was satisfied with the teamwork carried out by the animals.

“I heard the animals scream but it was too late to see the attacker so I checked the closed circuit television,” explained Beets, as reported by the British tabloid Daily Mail. “It took just 17 seconds between the appearance and disappearance of the hawk,” he added.

He also said this is the third time the farm animals have joined forces to block a predator: “In the two previous attacks, the turkey and the goats saved the chickens.”

The original video with the rescue mission received thousands of views, in addition to praise that went so far as to draw a parallel between the episode and “a Disney adventure”.

Others extolled the bravery of the goat. Perhaps because he was of a different class from those initially involved in the confusion: “But that goat, what a hero! He deserves a whole bale of alfalfa”, commented an internet user.

As for the hawk, one user suggested that he look for something to eat “elsewhere”. It is worth remembering that the predator just wanted to feed and is no villain in this story.