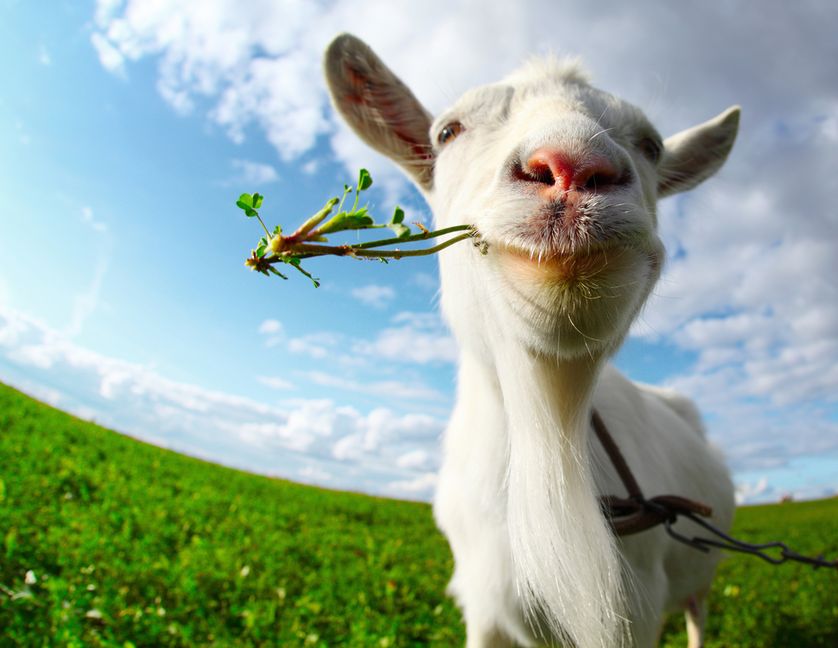 Goat babies are as cute as puppies. When you see one, you want to pick it up, hug it, and take it home. In fact, researchers have found that goats are more like dogs than we thought. They will look people in the eye when they are frustrated with a task.

So we know they are cute and look like dogs. What else do we know about these creatures? Here are 12 interesting facts facts about goats.

1. Goats were one of the first species of animals to be domesticated around 10,000 years ago. Goat remains have been found at archaeological sites in western Asia dating back some 9,000 years.

goats-farmin-livestock-goat
2. Both male and female specimens can have beards. Both may also have hair-covered appendages, usually around the throat area.

3. Goats are usually pretty hardy animals, but the only thing they don’t seem to like is the rain. According to the US National Library of Agriculture, “Goats will run to the closest available shelter in the approach of a storm, often arriving before the first drops of rain fall. They also have an intense aversion to puddles of water and mud. Probably through evolution they have been more free of parasites by avoiding getting wet!”.

4. There are two types of goats: domestic goats (Capra hircus), which are the type you’d find on a farm, and mountain goats (Oreamnos americana), which typically live in steep rocky areas in the northwestern United States.

goats-farmin-livestock-goat
5. Some people are frightened by the strange pupils in a goat’s eyes. Researchers say that slanted eyes typically belong to grazing prey. This feature gives them a wider field of view, but they don’t absorb as much light from above. This stops the blinding sun around them and allows them to keep an eye out for predators as they graze.

6. Goats can survive on the finest patches of grass, so the only places goats cannot live are tundra, desert, and aquatic habitats. There are even some wild groups of goats in Hawaii and other islands.

7. The coat of goats can come in a rainbow of colors and even some patterns. They can be white, black, brown and red.

goats-farmin-livestock-lamb 8. Goats are born with teeth. They have no teeth in their upper front jaw. Instead, a hard dental pad acts like teeth.
9. Goat varies widely in size depending on the breed. The small Nigerian dwarf goats weigh only about 9 kg. In the larger size, Anglo-Nubian goats can weigh up to 113 kgs.

goats-farmin-livestock-lamb
10. Like cows, goats are known as ruminants, meaning they have a complex system of stomachs for digestion. Goats graze using their lips, teeth and tongue. It then takes 11 to 15 hours for the food to pass through four stomachs.

What are goats used for on a farm?
Goats are mainly bred for milk and meat. Many people also raise goats as pets. Finally, a small number of farmers train goats to be work animals (eg pulling wheelbarrows) and a few others make use of the goats’ wool and rubbish.

Do female goats have beards?
Yes, just like horns, some females of specific breeds have beards, so you can’t define a goat’s gender depending on the presence or absence of a beard.

Do goats eat everything?
No, in some cases well-fed mature goats are more selective than other domesticated animals. However, keep in mind that young goats especially will try to try a wide variety of inedible things (eg plastic, clothes, etc.).

How long do domestic goats live?
The average goat lives from 10 to 13 years, but can reproduce (and females produce milk) from 1-1.5 to 7-9 years of age. There are – of course – notable exceptions to these age limits. Generally, females tend to live a little longer than goats.

Can goats eat meat?
Some breeders claim that they provide meat to their kids daily, and they always look healthy and prosperous. Any herbivorous animal can eat meat, but it doesn’t need it to stay healthy. It’s just a waste of resources.

Are goats herd animals?
Yes, and you must treat them like herd animals. This means that you shouldn’t just raise one goat, as that goat will likely end up getting depressed, which will lead to more serious health problems.

How many breeds of goats are there in the world?
about 230

Do you have a question about goats? Please share your question in the comments below. We will do our best to respond as soon as possible.