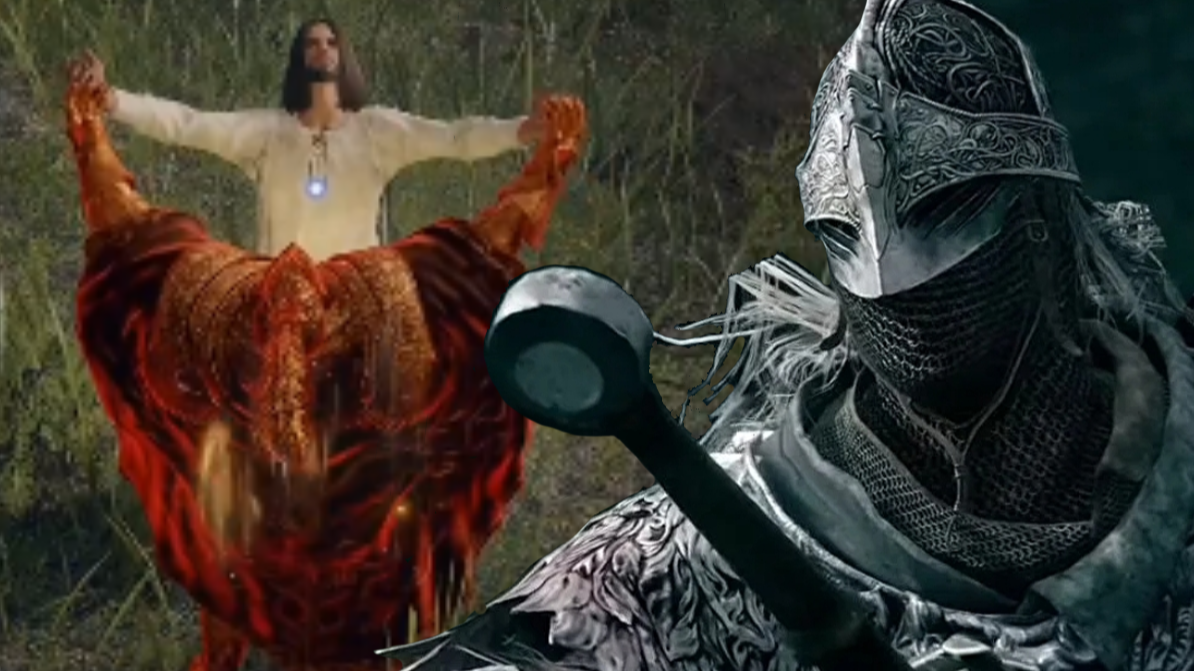 Players and Elden Ring enthusiasts often create incredible appearances within the game, as is the case with a version of “Will Smith” who slaps characters in multiplayer disputes. In a new confrontation, a user bumped into the figures of Jesus and Satan in a specific region of the map in Elden Ring .
A Reddit user nicknamed Mar_Reddit was playing the title and as he approached the Limgrave region, to his surprise, he came across the messianic duo. Until then, other users have already met Jesus during the game, however, it is the first time that Satan appears alongside his arch-enemy.

The Reddit user posted a video to show how his meeting with the Christian duo went, and in it, the player kneels and pledges his loyalty to Jesus. Then, after a shared incantation, the player drew his sword and attacked Satan to death — and of course, the lord of light also joined in the fray.

Jesus even helped the player in the quest to defeat the prince of darkness, however, the son of God also started fighting the player. Fortunately or not, another enemy appeared and Jesus sacrificed himself to save Mar_Reddit.

“Then I met Jesus Christ at Elden Ring … This was a roller coaster of emotions. Whoever [creates this encounter] is, thank you. Hope to enjoy my side of our meeting,” said user Mar_Reddit.

There’s no shortage of bizarre players to encounter in Elden Ring. From ”Will Smith” invading just to slap people to nightmarish multiplayer confrontations, the Lands Between is full of curious and strange discoveries. But I wasn’t expecting to stumble upon the most blasphemous run-in yet: a Redditor had a chance, in-the-flesh meeting with Jesus and Satan, with a twist ending that left me pretty weak.

In Mar_Reddit’s four-minute video, which you can catch here, the Redditor has just invaded another game near the start of the Limgrave region when, just up ahead, they run into an iconic duo. The son of God is a rather popular Elden Ring build, showing up all over YouTube, but His infernal foe is a newer creation. Both players, appropriately named “Jesus” and “Satan,” looked their parts, sporting white robes with red skin, respectively.

As Mar_Reddit approached the two thinking it was some sorta “trap,” they pledged their loyalty to Jesus by kneeling and praying. But after a shared Erdtree Heal incantation, Mar_Reddit pulls a fast one, leaping to attack the prince of darkness in the name of the lord. Though He was technically Satan’s co-op buddy, Jesus played along, and ultimately the duo made pretty short work of the Sith-looking fallen angel.

That could’ve been the end of the encounter right there. Problem solved, the Lands Between saved, all Tarnished live happily ever after. Except the son of God, outta nowhere, went rogue and attacked the hapless, reverent invader. The two then got into a prolonged squabble.

Attempting to atone for his sins, though, Mar_Reddit stopped swinging their big sword so Jesus could “rapture” them (i.e. put them deep in the ground). But that didn’t work out so well, because the notorious field-boss Tree Sentinel showed up and started swinging. Mar_Reddit tried saving their savior, but as the legend goes, He sacrificed Himself so that we may all know defeat in the Lands Between. Or something like that. In short, Jesus got wrecked by the Tree Sentinel.